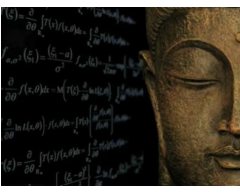 Recently I’ve been reading about science behind Buddhism and ultimate reality.I thought it would be nice to blog some of few facts that I understood so far.

It is clear that recent researches and studies of modern science have revealed many great parallelisms between Buddhism and science. Especially with Quantum physics, which look at the universe and at the reality in a complete different perspective , scientists amazed that these new results show a great similarities with Buddhas teachings which had been taught over 2500 years ago.

One of the amazing discoveries that scientists have made was the emptiness in matters.By experiments like ‘double slit experiment ‘,it is concluded that fundamental particles are empty of inherent existence and exist in an undefined state of potentialities. They become ‘real’ when a mind interacts with them and give them a meaning. Whenever there is not mind there is no meaning or no reality.This quantum emptiness is similar to the Sunyata in Buddhism,which is discussed in ‘Prajna Paramita Hridaya Sutra.’

Above mentioned undefined state of potentialities behave as a field of energy. According to Quantum physics, this field is considered as the fundamental level of the universe , which is called ‘Quantum Field’ or ‘Unified Field’. It is considered that fluctuations of this field give rise to so called ‘Realities’.So according to that the ‘Reality’ that we live in, is just another one of infinite number of realities.

Quantum physics have changed the way we look at reality. It is amazed to see that almost every finding in Quantum mechanics has a connection with teaching in Buddhism.

But scienstists have lots of things to learn.I think Quantum physics is still in its child stage.There are infinite amount of pure knowledge that scientists can get from teachings of Lord Buddha – The greatest “Quantum Physicist” ever.

Following are few of selected sources which I found useful to anyone who’s interested :

12 thoughts on “Buddhism – The ultimate truth of reality”